Skip to content
Home / Debates / The United States’ role in the Vietnam War was an unnecessary step in the fight against communism. 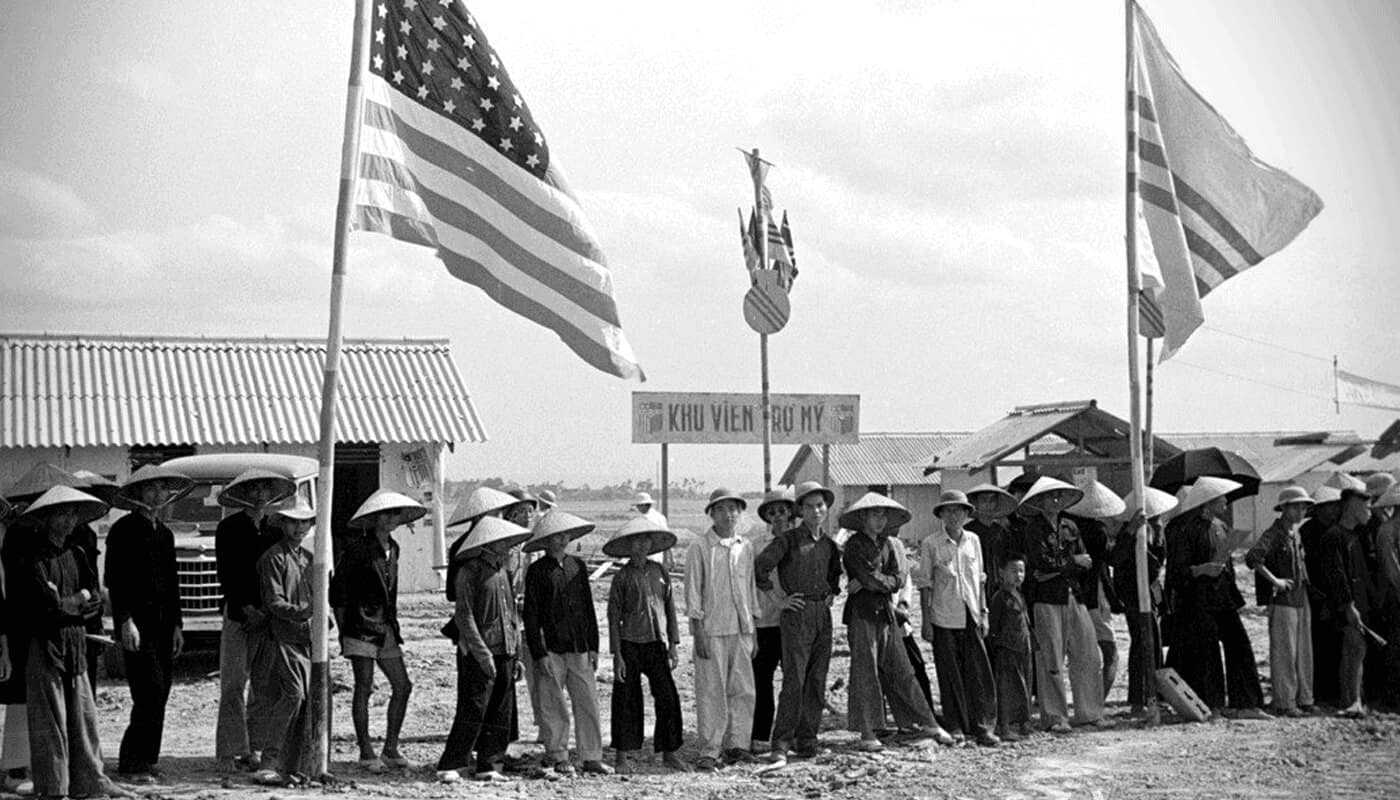 The Vietnam War was a failed attempt by the United States to protect South Vietnam from becoming a communistic country. It was a very unpopular war and to this day many Americans still question why the United States intervened. It was the longest war in American history up until the Afghanistan War which the U.S is still involved in today. Many soldiers and citizens lost their lives during this war. One huge effect of the Vietnam War was the War Powers Act which was passed in 1973 and states that a President has to receive approval by Congress before acting in oversee affairs. As the war progressed it became clear that United States citizens disproved of the war and wanted to end it. In 1973 an agreement was reached in which U.S forces would withdraw completely from Vietnam which in turn left South Vietnam without much help. Two years later South Vietnam surrendered and was again reunited with North Vietnam. The US violated many of the principals of the just war theory, causing it qualify as an unjust and unneeded war.

Operation Ranch Hand was when the U.S sprayed 20 million gallons of defoliants and herbicides. It is estimated that 400,000 people were killed or maimed and 500,000 children were born with birth defects as a result of this. The use of defoliants was protested as early as 1964 by the Federation of American Scientists. In 1967, seventeen Nobel laureates and five thousand other scientists signed a petition asking for an immediate end to the use of defoliants and herbicides in Vietnam. The Agents used were known as the Rainbow Herbicides, and consisted of Agent Pink, Green, Purple, Blue, White, and Orange. Agent Orange specifically was responsible for affecting as many as 3 million vietnamese people, including at least 150,000 children born with birth defects. Women had a much higher rate of stillbirths and miscarriages, due to dioxin contamination. It was known beforehand that the 2,4,5-T manufacturing process created dioxin, which causes the disfiguring skin complaint chloracne in tiny doses. But it was said that the herbicides weren’t harmful to humans and therefore didn’t count as chemical warfare. Many experts, including one who developed half of agent orange and was extensively involved in it’s study, opposed the use of it in warfare due to the potential side effects to humans and the environment. However, the US consistently argued that it was not a chemical weapon because it was being used to destroy plant cover and not to harm humans.This weapon was unneeded and an unjust weapon to use in a war. It was morally wrong along with being an unjust weapon to use in a war that’s supposed to be against communism.

There were widespread massacres and bombings against innocents

It was stated by administration officials that the only reason for the bombing is because they thought it might encourage North Vietnam to accept South Vietnam as non communist. The President actually said one of the reasons for the bombing was to boost the confidence of South Vietnam and destroy the North’s ambition. By doing so it would create a need for the North to regroup with South Vietnam. There were many different attempts to try and level the playing field between Southern Vietnam and U.S. One of the ways was to slow the flow of North Vietnamese soldiers and supplies into South Vietnam by sending American forces to destroy Communist supply bases in Cambodia. These many efforts were made to end the war after this action. The U.S. made the call to withdraw many troops and make Southern Vietnam to pick up where we left off and ultimately take control of what the situation that created the war. This a morally wrong action because if we did not interfere in Vietnams affairs we would not have lost many soliders who gave their life for efforts to try and reunite Vietnam as a whole.

President Johnson got around Congress to launch an attack

President Lyndon Johnson did not make a declaration of war like he was supposed to. It states that in the Constitution in order to be at war with a country a declaration of war has to be administered. President Johnson launched an air attack on North Vietnam while circumnavigating Congress. He did not ask for their permission to launch the attack that killed many Vietnamese citizens. Because of this in 1973, the year the war ended Congress enacted the War Powers Act which requires the president to receive permission from Congress before putting Americans in forces overseas. Things that were happening because of the war with North Vietnam were starting to affect the laws of the United States. This war made it clear that something needed to be changed. President Johnson used an airstrike that he thought was the best and only option to change the tide of the war. It went to America barely being in the war to America launching air strikes on North Vietnam. This escalated the war very quickly and made it clear that America was in the war. Along with the air strikes President Johnson also committed troops to the ground. This was extremely unnecessary and unjust considering The United States barely had their feet wet in the war. Because President Lyndon Johnson acted extremely quickly and didn’t think things through it costed the Vietnamese their lives and even made Congress change the president. An air strike is obviously something that should be thought through because of all the consequences of it. When Congress changed the law it only reassured that the air strike was something that didn’t need to be done. Although there were no laws against it at the time the President did not have legitimate authority to launch the air strikes.

In 1964 Operation Rolling Thunder took effect. President Lyndon Johnson launched an air attack that would end up killing an estimated two million vietnamese and destroying thousands of houses and villages. The reason for the United States launching this air attack was preemptive. This attack was used as an excuse to put military pressure on North Vietnam and to discourage them from continuing the war. The United States claims that the attack was a retaliation strike and that the civilian casualties were unavoidable victims. Two million civilians didn’t have to be killed. The U.S claims that the airstrike was a retaliation due to the attacking of the U.S warships in the Gulf of Tonkin. However it’s not even certain that it was the North Vietnamese who attacked the warships. The United States should have taken the time to prove that it was the North Vietnamese who attacked the warships and not have jumped to conclusions. The U.S claimed that the attack was retaliation however behind closed door President Johnson said that the strike was to boost the confidence of South Vietnam and to cripple the Viet Cong by cutting them off from supplies in North Vietnam. This directly goes against the just war principles of right intention and civilian casualties. There was no wrong being suffered by the United States so they didn’t have the authority to launch an air attack. If it was proven that the North Vietnamese attacked the warships in the Gulf of Tonkin then the United States would have ground for a counter attack. However it was not proven.

There was not a sufficient cause for the attack

The Vietnam War was a crime, it was an act that the U.S. created because they tried to suppress the fact that Vietnam had made an heroic movement which had driven out the french colonialism out of the country. The international agreement that Vietnam and the U.S. had was that Vietnam had to divide into north and south with free elections even before the French were out of the country.This also brought about the fact that government officials had made assumptions that the war was a forfeit and that their exaggerated influence created a mistake that communism had underestimated the power of nationalism. This war actually created wonders on what type of war it represented. It was questioned if it was a sin, a blunder, a necessary war, was it a noble cause, or an idealistic effort to protect the South Vietnamese from being an totalitarian government. If the United State didn’t intervene in the Vietnam War the outcome could be different. The U.S launched an air attack on North Vietnam which then led to the 1968 Tet Offensive which was a set of attacks on over 100 South Vietnam’s towns. The Tet Offensive killed many people and destroyed towns. Those people in South Vietnam didn’t have to lose their lives and towns didn’t have to be destroyed. However because the United States launched the air attacks and put troops on the ground South Vietnam suffered the consequences.

The draft caused unwilling men to be made to fight.

The Viet-Cong had already started attacking Southern Vietnam so the U.S had to act quickly in deploying troops.2.2 million men were drafted. It changed the way at home. Most signed up to avoid being drafted.The reason for this action was because the U.S. had set up a certain amount of troops to go and support Southern Vietnam. The men who were sent as the second string of defense were mostly volunteers. The men who volunteered themselves tried to make sure they would not be put into the infantry. Because there was a lot of government influence they kept sending more and more troops to help Southern Vietnam. Ultimately sending more than the needed amount of troops to get the Viet-cong to unite with the Southern Vietnam. Later on in the war the U.S. was able to end the conflict through diplomacy.From that an agreement was formed and the U.S. troops were able to withdraw from the Vietnam.

The US had to attack Vietnam to stop the Domino Effect

When the United States found out that South Vietnam was being attacked by Vietnam they were not sure if they should get involved. Much of the public was against getting involved because they did not believe it was their war to fight. The main reason the Vietnamese were at war was communism. South Vietnam wanted to be a non communist country however North Vietnam did not agree and thought they should be a communist country. The United States debated going to war for some time. Since the war was against communism many other countries figured the United States would enter on behalf of the South Vietnam. When the U.S didn’t immediately enter there was talk among the countries that the U.S wasn’t as much against communism as they claimed to be. Countries were starting to question the United States’ motives and real beliefs. Countries were even considering the U.S to be lying about disagreeing with communism and the United States’ integrity was at stake. The United States couldn’t chance the risk of potentially losing allies so finally after much debated about 2,000 soldiers were sent over to maintain order. There was no declaration of war signed throughout the entire war. Slowly the number of soldiers there began to increase. The United States was finally fighting with the South Vietnamese with the end goal of mind of ending communism.

Here are the results of the poll questions above. Please participate in order to ensure that your individual voice and input is included!